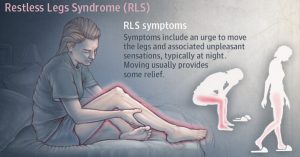 Restless Leg Syndrome is characterized by unpleasant sensations in the legs and rarely arms which is accompanied by an urge to move which appears during times of inactivity. This means the symptoms improve after moving the affected extremities. RLS is common and affects between 5% and 15% of the population.

Although the exact cause of RLS is not completely understood, some studies have identified abnormalities in both the central and peripheral nervous system in patients who have RLS. There has also been a correlation between RLS and several other conditions including: low iron stores, Periodic Limb Movement Syndrome, neuropathy, pregnancy, and spinal cord disease.

The diagnosis of RLS is usually based by obtaining a thorough history. It is important to differentiate RLS between other issues such as foot tapping and nocturnal leg cramps. Some routine blood work may be done to check for low iron stores. If your iron stores are low, a supplement should be recommended. There are several different medications which may be useful in treating the symptoms of RLS and these should be discussed with your sleep physician.